I am an official

Tags used on this Blog

Remind team members in a retrospective of the significance and meaningfulness of their jobs. After some bafflement they could realize again that their jobs are important and do create value.

This Monday I was inspired by the following tweet:

What’s a quick and effective way to motivate employees?buff.ly/WQmTVh

I tried to work with the answer (“Remind them why their jobs are important.”) in a retrospective activity straight ahead and thought it worked quite well.
Like a User Story Form (“As [role] I want [desite] so that [benefit].”) I asked each team member to complete the following empty columns by wiriting post-its:
My work as [role] has [this concrete significance] for [target group, user]. (Significance Story) 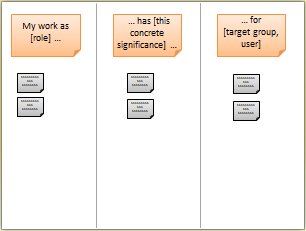 In the [target group, user]-column you will find several, different post-its. Ask in the next step what the expectations might be that those users have on them as a team. Let them again write their answers on post-its and stick those in a new, empty comlumn.

Finally let the team decide in a discussion which “Top 3” of the user’s expectations they want to measure up to preferentially.

Be surprised about the outcome.
In my case the team wanted to measure up to the exectation of being a team that creates value and that makes a difference. 🙂